Youts on the loose.

Once upon a time, a one, Vincent Gambini had cause to defend a couple of youts who had been wrongly accused of murdering the sack of suds store clerk. Luckily, no one can pull the wool over the eyes of a Gambini and these youts were cleared of murder once we learn about a thing or two about positraction and 1960’s metallic mint green convertibles. However, to two urchins I was forced to encounter this weekend were clearly guilty, of many many crimes…

The first meeting occurred whilst cycling home on Friday evening after a gruelling week of hard graft at the coalface/sitting at a desk staring dreamily into the sun, wondering why my eyes were hurting. It was a meeting that swiftly led me to the realisation that children, anyone under 25, should be banned from using or going anywhere near any form of level, zebra, pelican or general street crossings furniture. They should be forced to just take a chance that they won’t be dashed against the speeding bumper of a passing lorry if they ever wish to cross the road. We can implement some form of simple biometric test at the crossings and any youte flouting the law can just be lasered to death instantly. It’s the only way they will learn not to abuse the things that are put there to help people.

What, you might wonder, lead to such a revelation, well like many historically important people I had an epiphany, for the first of the weekend’s troublesome youtes made themselves known to me.

Whilst wearing some frankly preposterous combination of a stupid baggy hoodie, trousers so low I can barely imagine how they are able to walk and an oversized baseball cap, probably with the price tag still attached so we all know how new and “cool” it is, they decided they needed to cross the road, so like any decent law abiding person wouldn’t do, they just walked out into the road without looking either way.

Sadly the future young offender in question was not immediately struck down and smeared across the road; no they in fact made it safely to the other side, in the process, causing me to have to slow down somewhat speedily to avoid crashing into them. This was pretty irritating frankly as I would have loved to have mown them down there and then, but I did not really have time over the weekend to wash the blood from my bike so decided against this action.

However, what infuriated me the most was than on crossing the road, I spied, whilst swearing at him for being a blistering idiot, that the little fucker then thought it would be a hilariously amusing idea to press the “I want to cross the road” button and then fuck off on his way, leaving a potentially pointless red light just minutes away from happening. He even looked like he had just cured cancer as he did it, such was the brilliance of the gag that he probably spent weeks crafting in his, no doubt, future Nobel prize winning mind.

It things like this that almost make me think that I should run red lights on my bike in future and be damned any old people who are not sprightly enough to get out the way.

The second youte that was encountered infuriated me so much that I think it best to just give you a visual representation of him, which you can see below. I’m fairly sure you can spot one or two things about his overall appearance that would cause any right thinking fashionista to explode with anger. 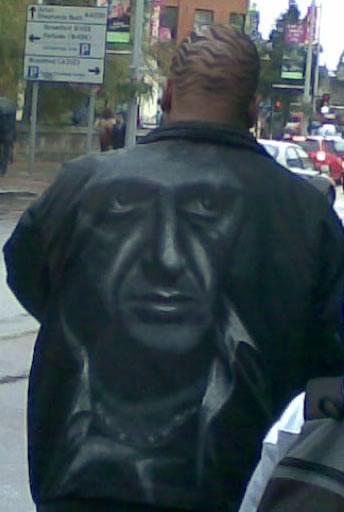 A Youte in the wild - Yes that is real hair that looks like a tiger print and an atrocious Scarface jacket.

I’m still, some 6 hours later, confused as to what is more irritating, the head or the jacket. Just imagine the time and thought process (if indeed there is a brain in that somewhat curious head) that went into crafting that “look”, and for what, just so people can stare at you with incredulous confusion as to what you are trying to achieve?